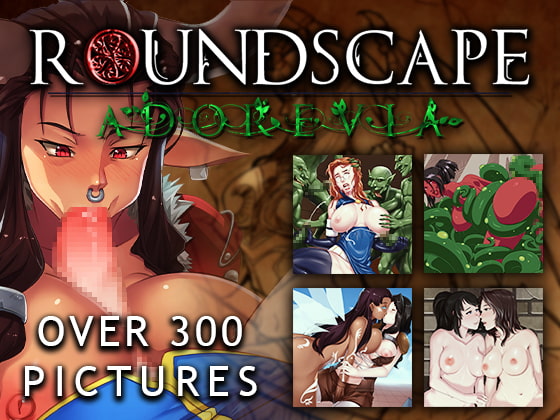 Roundscape: Adorevia is a new erotic fantasy game brought to you by Kaliyo and Wildquill. The world of Adorevia is one fraught with danger, but also adventure for those brave enough to seek it. Walk the lush forests, see the magnificent Dwarven city-states, and help stop a terrible threat that could spell doom to countless innocents as you head out on your quest! Of course, along the way, you’ll find other brave souls willing to share in your adventures, and perhaps, your bed. The continent of Adorevia, at first glance, is a peaceful and geographically diverse land, populated by an eclectic exotic mix of races and creatures, ranging from the beautiful – but deadly – Sirens that roam the open coasts; to the futanari race of the Nexilim, whose very culture revolves around their constant lustful needs. We want to empower the player with as much choice as possible, allowing you to choose your gender, appearance, class and heritage, as you embark upon an adventure that is both epic in ambition, but profoundly personalised in execution. – The option to choose your gender, appearance, class and a unique character history that will not only open up exclusive content within the game, but ultimately change how the world around you reacts to your presence. – You will collect a diverse range of companions, as you explore the continent, that will each have their own fetishist design and agendas. We also want an emphasis on making these characters compelling and wholly rounded; with their own actions, behaviours, morals and world-views. – Engage in dialogue that is deep and expansive, underpinned by a system of morality and choice: you ultimately have the choice of how you want to react to the inhabitants of the world around you, and likewise, face the consequences of how your actions are perceived. – We want gameplay to be reminiscent of traditional RPG experiences. Adorevia is designed to be well populated and geographically diverse – locations ranging from dense rainforests, to open desert plains. There will also be a heavy emphasis on collecting and using items and weapons, each with their own practical and erotic uses. – Players will unlock a castle that will serve as a hub. The castle can be upgraded with new rooms and nearby structures including an inn and stable. Various NPCs throughout the game can be recruited to fill the halls of your castle. Each helps provide your character with resources to help your adventuring. Roundscape even includes a mini game where you must keep your castle well defended or risk losing your gold to attacking raiders. To help defend your castle you can hire guards and factions.

「Your Adventures in Wonderland!」