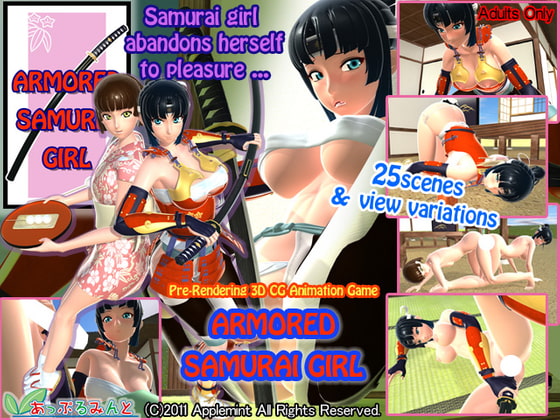 [Synopsis] A long time ago, for searching and subjugation of monsters, the feudal government established Task force against monsters. A samurai girl called Uraha and a ninja called Genmai belong to the task force. They drop by a teahouse for information gathering and rest. There is a poster girl called Renge at the teahouse, and she is working alone. However, through the Genmai’s carelessness, the fact that Renge is a dragged-up man is revealed. His real name is Shouma, and he disguised himself as his older sister Renge. Renge was very popular with patrons of the teahouse. Since their parents became sick, she became unable to work because of concentrating on nursing. If Renge is not there to serve, sales at the teahouse would be reduced drastically, so he committed himself to disguise her. Now, the guise came to light, reputation of the shop is damaged, and Shouma despair of the future of the shop. Then, Genmai suggests a revival measure. But, its content is to perform sexual service to customers. Management the teahouse by the triad begins. !! This is a fictional work. Any resemblance to actual organizations or persons, living or dead, is purely coincidental. – Various 25 scenes, they are all animated! Each scene has view variations, total more than 100 cuts. – Voice actor: Sumishiro Kiyoka as Rindou Uraha Noranoneko as Souma – This is the ENGLISH version translated by the circle. (Text: English / Voice: Japanese)

「Something In The Water – Origins!」