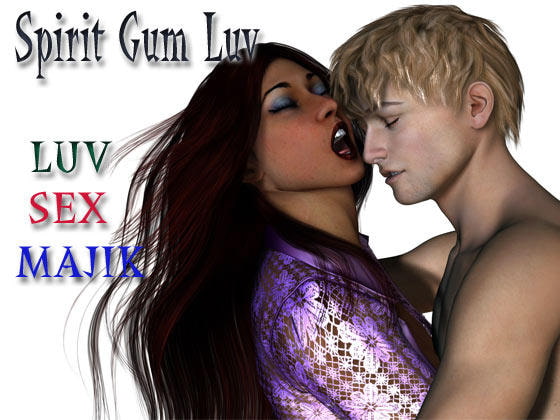 Gum Luv is the brainchild of Alicia R. Norman a.k.a LUV, a fantasy enthusiast and performer who wanted to bring her graphic novel of the same name to life via animation. The bi-sexual screenplay writer also wanted to create a fantasy world with an emphasis on majik as well as fun erotic bi-elements. Because of this, any of the heroines are bi-sexual, creating awareness for a very misunderstood lifestyle. LUV initially created SGL as a pen and ink graphic novel in the style of the Hernandez Bros., LOVE AND ROCKETS. The story focused on the love lives of a group of wizards of various orientations who struggled not only to understand spells but the mysteries of human sexuality and love itself. The story centers around a young sorcerer named Aaron Krawford, a celestial wannabe who has a massive crush on the gorgeous Dean of Stargazer University, Isabella. What he doesn’t know is Isabella is interested in him as well, but not for the same reasons. Seems Aaron is showing the hallmarks of a fairly nasty mage called the Covalent, a natural wizard who can combine all disciplines of magic, usually with disastrous results. Because of his natural born talents, the Covalent often becomes power mad and in each era he has emerged has brought darkness to mankind. Isabella belongs to an ancient immortal sect called The Templars of Majiks, who look for the emergence of the Covalent every 3rd century. Highly trained sorcerers themselves, they often combine their powers, stamping him out before he can fully develop and wreak destruction on humanity. Thing is, Isabella’s surveillance of Aaron is indicating that he is a gentle and kind spirit, not at all like the dark monsters she had chased in the past. This revelation is giving her pause about destroying him and rising feelings of lust and passion soon follow. In VOL. 1, Isabella confirms that Aaron is indeed showing indications of being this century’s covalent. Nonetheless, she is drawn to him and soon finds herself unable to resist giving in to her passions… SPIRIT GUM LUV TV…SGL downloads are a culmination of the first season of Spirit Gum Luv which can be seen for free and found at https://www.spiritgumluv.tv The downloads as well as the DVD offer lengthy lovemaking scenes that were deleted from the online TV version and can be seen in one fluid stream, whereas the online TV show is divided in the 14 episodes that have to be individually buffered (working on making the streaming faster guys). Current fans may enjoy seeing the show uninterrupted or getting the DVD which will contain the entire first season as well as the premier of when bratty Sasha meets the enigmatic Master Kuan. The DVD also offers stills, behinds the scenes at LUV Multimedia, commentary from animator/artist LUV and much more… as always STAY TUNED….

「Church in the Wild!」